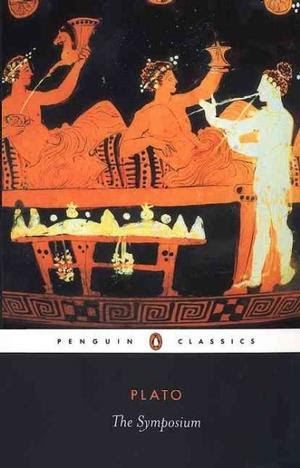 On this first Classics Club spin, lucky number 14 got me The Symposium by Plato - an essay on the many aspects of love and an insight into the notion of platonic love.

The title means something like "a get-together with drinks" which is what DOES NOT happen when several of the main characters meet to eat and be merry (they actually talk of the vice of drinking...oh Dionysus!), and where Socrates will eventually speak of his version of love.

After a delectable dinner, Phaedrus, one of the participants in this feast, complains that while everyone has at some point made or heard of odes to the various gods, nothing has ever been said about the god of love.  He suggests, therefore, that everyone makes the effort and praise this forgotten god.

There are plenty of speeches that follow, all different, which show how multi-faceted love can be:  from the oldest feeling in the world, to a clear distinction between desire and "heavenly" love.  This love, between an elder man and a boy (women at the point in time were considered just a little bit higher than animals - but that's another story), was in effect an business transaction, where sexual gratification was exchanged for knowledge and wisdom.

Aristophanes, one of the more-known comedy poets of the times takes the floor and comes up with an ode that truly spoke to me:  he suggests that in the beginning of time there were twice the population on Earth - but Zeus got jealous (as always...) and cut everyone in half.  Ever since that incident, people have been searching "for their other half", so that they become whole again...  Not a bad interpretation dating from the 5th century b.C. I would even say I prefer this to any modern outlook on love!

When we come to Socrates, we hear that he's more interested in Love itself, not just the object of love.  He won't be consumed with the practical interpretations that consume everyone else - he's interested in the highest of emotions and wants to find out more about this. To this end, he reveals that a wise woman, Diotima, has cleared matters for him.  Major shock -- a woman who is wise and who consults Socrates! And he's not afraid to admit it!  At this point, I'm simply astonished and amazed a) that Socrates was such a revolutionary and that b) Plato would not try to hide such "heretic" teachings.  Indeed, says Socrates, love is a spirit that flows among us and leads to and derives from reproduction - be this human reproduction or reproduction of ideas, this notion of Beauty should be the central element in our lives .

The entertainment bit in this work comes in the form of Alciviades, totally drunk, who collapses in the middle of the feast, whining of never having managed to seduce Socrates - pity, given he has all the charismatic qualities everyone around him seeks.  But no, Socrates is not interested in physical love -- and here is our introduction to Platonic love, a result (or not) of Socrates' teachings - he's more interested in the ethereal, in the pure form of love, not to be messed up with the "romancing" of everyday life - the highest level of pursuit is the pursuit of wisdom...


Plato's Symposium (in both Greek and English) is available for free on Project Gutenberg.

This post will also be published on Project Gutenberg Project.