The Classics Club: The Hound of the Baskervilles 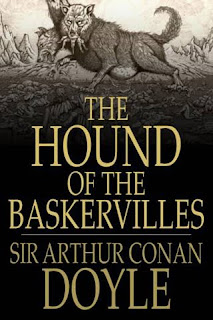 The Hound of the Baskervilles by A. Conan Doyle must be one of the few books that I read AFTER having watched various visual interpretations.  So the question for me was no longer whodunnit, but rather how, when and where, under what circumstances etc...

First of all, one either has to like this genre or not.  If you don't like it, it is indeed silly - to say the least.  And yet, much as I like mysteries, I also like the pen of Conan Doyle, because he writes in a style that provides much more depth onto the storyline but also, and more importantly, on the relationship between Holmes and Watson.

In this case, Dr. Mortirer seeks their help when he unveils an 18-century manuscript that details a "plague" cast upon the Baskervilles from a supernatural hound lurking in the moors - its most recent victim, Sir Charles Baskerville, has fuelled the fear in the area once more.  The next of kin, Sir Henry Baskerville, is in London en route to Baskerville Hall in Devonshire, only to be warned of his intention to stay there, as well as to have his shoes stolen.  Holmes and Watson agree to take the case, albeit in a somewhat peculiar manner:  It will be Watson taking the reins in this investigation, while Holmes stays back in London...

Again, I will make the distinction between films and the book.  While most films portray Watson as Holmes' ordinary sidekick, I never get that impression from the book.  Here the two are equal, and there are many instances where Holmes is not shy to point out Watson's strong points:  When he suggests Watson accompanies Sir Baskerville, he justifies it thus:


"there is no man who is better worth having at your side when you are in a tight place.  No one can say so more confidently than I"

So, when even the great Holmes finds himself in a tight spot, who does he call? Indeed, Watson...  And again, when Watson complaints that Holmes did not tell him he was in Devonshire as well, Holmes replies: "My dear fellow, you have been invaluable to me in this as in many  other cases".  Just so that there are no misunderstandings, Holmes and Watson are a team!


The main theme in this novel is the supernatural:  the hound lurking around the moors is not a common little dog - no, it's a horrible, impressive hound, with fire coming out its eyes and mouth, it is the devil ... Something that common folk would immediately believe and I would think even Sir Henry and Dr. Mortirer would have trouble keeping out of their thoughts.  And yet, here is Holmes who also states his preference for this world:


"In a modest way I have combated evil, but to take on the Father of Evil himself would, perhaps, be too ambitious a task"

Modesty or realisation that even his power has limitations?  In a reversal of roles, I found that it was the scientific mind of Watson that remained calm even in instances of distress and shed light into the story.


Another important theme are of course the moors, with their vastness and vagueness proving deadly for people and animals.  Everyone is afraid, does not dare to walk over in the dark - still, most of the important scenes in the story take place there.  I would even say that the moors get to have a personality, they are often described as "melancholy" and a place where


"you never tire of the moor.  You cannot think the wonderful secrets which it contains.  It is so vast, and so barren, and so mysterious"

But danger awaits around the corner:  "the longer one stays here the more does the spirit of the moor sink into one's soul, and also its grim charm".


The story in the Hound is past-paced, and I thoroughly welcomed the alteration between dialogue, narration, letters and diary entries.  This variety in text format provided for change in pace and prevented me from feeling  bored (not that I could ever feel bored in such a novel).  The end is fairly predictable, but still not without some effort - which is why I generally like Sherlock Holmes.  Everything is within the boundaries of the rational...


Two things that I found remarkable:  the convict, who from a dangerous criminal is now a guileless creature  sheltered by his sister, because "Evil indeed is the man who has not one woman to mourn him" (and here I thought Sherlock was a misogynist...) and a red herring that almost made me scream:  Dr Mortirer insists that he gives Watson a lift homeward "into his dog-cart".  This is of course a light horse-drawn cart, and not a dog-drawn cart carrying people (phew...)