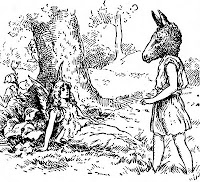 An interesting readalong on the net is Reading Shakespeare - a play a month... an ingenious idea and within a time frame that is feasible even for someone with a überfull-time job like myself... My solution to separating the readalongs with the challenge and book club reading, is to dedicate my weekends to the readalongs, and to read all other books over the week (I am organised, if nothing else...)

A mid-summer night's dream is a well-known fairy tale of love, betrayal and tricks... all the right ingredients for a havoc made in fairyland...

Shakespeare starts off with the main cause of distress in Athens: a strange love-triangle, with Hermia loving Lysander but being loved by Demetrius, who shuns Helena, who's in love with Demetrius... Oufff! Already the complications show the way to how the story proceeds... I find it weird that Demetrius would insist on marrying Hermia who doen’t love him, or the Helena would be so infatuated with Demetrius (but then again I am a present-day cynic…). The only couple that seems closer to today's standards is Hermia and Lysander, but there, as well:

"The course of true love never did run smooth"

Why the use of magic and fantasy in this play? I believe that the fantasy world is the only chance we get to find and express our true feelings, our gateway from the “real” world, with all its boundaries and insecurities – then but even more so now.

Shakespeare also uses quotes to reach the desired effect: Egeus talks about his daughter Hermia “As she is mine I may dispose of her” (grrr…) but even Theseus, the duke, telling her “To you your father should be as a god” (double grrr…) – of course I was laughing while reading these quotes, but nevertheless they made me wonder how much this exaggeration could highlight the difficulties people faced (and face) when not following the "accepted" road (in love, but also in other matters).

An on to the world of fairies. I found Act II especially poetic (I suppose it fits perfectly with the fairy world) and I thoroughly enjoyed the reference to Cupid and I suppose Elisabeth?? Because if it is indeed Queen Elisabeth, I can understand the reference made by Hermia to Lysander to keep a distance…

Various misunderstandings happen, and affections change among the different couples - in real life this would be considered a serious matter, but in the play it's described in a merry and lighthearted manner. This made me wonder whether the play is about love at all: if I compare it to Romeo & Juliet (an exaggerated example, I agree) I cannot see the same depth of character or use of language. I start to think whether this play is not  a slight mockery of what people do for (or because) of love (with the help of Puck!).


What is beautiful about Shakespeare's plays is, of course, the language.  If someone else took these same elements of the story and tried to present it to me, I would not be amused...  But, here, every flower brings a note of something in the story, every time Puck speaks, I feel like wandering off to the woods... Those who have watched stage productions get a different glimpse into the world of Shakespeare, but I, a non-native speaker, am also content with the Hollywood version of 1999, which I admit is not that bad:  when the play executed nicely, the language comes alive (which it is) and paints bright stars in the night...


That night when everything seems to go wrong... wrong people/fairies get the potions, horrible truths come up in the air (dwarf?  where are your stiletto heels, woman???) and insecurities rage in the air while someone becomes an ass... And for all that we blame a tiny bit of potion?  Can it be that love is so magical, that any confusion and disorder can only be because of a "trick"? are we mortals so without magic, that we don't have the capacity to feel perplexed otherwise?

In the following act, I have my only two objections in the play:  the one where Oberon requests the child from Titania in exchange for undoing the spell, which he receives -- a very thin line between the magic of love and blackmail? And then Demetrius is still under the first spell when love is restored between him and Helena.  No true feelings of love, then.  But all is all right, balance is restored, and as the magic of the night is undone, the sun rises and there are two weddings take place.
Here again, Shakespeare is innovative:  he could very well have put a full stop and be done with the play.  But he chooses instead to focus on the sub-plot of a play within the play, of Pyramus and Thisbe, to provide some enjoyment to the public, after the "crises" presented before.

I must admit that from all the characters in this play, I thoroughly enjoyed Puck -- he's such a naughty, little creature that I can't but like him (and the fact that he's interpreted by S. Tucci in the film is an extra bonus...) and I particularly like the ending, that makes sure that the audience will leave in good mood (ingenious Shakespeare at his best):

"If we shadows have offended,
Think but this, and all is mended,
That you have but slumber'd here
While these visions did appear.
And this weak and idle theme,
No more yielding but a dream,
Gentles, do not reprehend:
if you pardon, we will mend:
And, as I am an honest Puck,
If we have unearned luck
Now to 'scape the serpent's tongue,
We will make amends ere long;
Else the Puck a liar call;
So, good night unto you all.
Give me your hands, if we be friends,
And Robin shall restore amends".