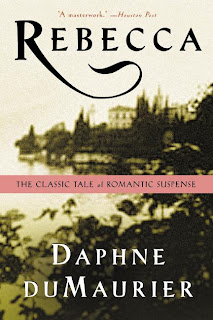 I read Rebecca for the Gothic event hosted by O of Délaissé last October, but started in an unusual manner:  I first watched Hitchcock's film version (with Joan Fontaine et Laurence Olivier), so that I would get into the mood, before I read the book...

A classic film-noir, it was all I needed to get over a nasty cold that bugged me for a week!  On a serious note, though, I knew Hitchcock would more or less keep the storyline intact, and I really enjoyed the twists to the story, but what about the ending?  Would that be totally different in the book?


This has to be one of the most memorable openings in literature:

Last night I dreamt I went to Manderley again


The words of a prematurely-old woman, showing she's had a terrible experience that has marked her life and will probably never leave her memory is almost as haunting as if it had happened to me personally. I immediately want to know more about this story and why things have turned out the way they have...

Du Maurier gets into the protagonist's thoughts, and we are treated in the beginning in following an inexperienced, slightly naive girl as she meets the man of her dreams and marries him.  Interestingly enough, she's never mentioned, except for her married name, Mrs. de Winter.  Is she not important enough to be named?  Is the fact that there is a first Mrs. de Winter (Rebecca), so overpowering that noone else can come to that level again?

These were my questions towards the end of the novel.  Up to about 2/3 of the book, I was treated to the thoughts of a girl who - to my opinion - was really in need of getting a life:  her imagination would run wild and I would have to read whole passages of how a simple event would be transformed in her eyes:


The beeches with white, naked limbs leant close to one another, their branches intermingled in a strange embrace, making a vault above my head like the archway of a church


When Maxim proposes to her, she knows exactly what that entails:


I would be his wife, we would walk in the garde together, we would stroll down that path in the valley to the shingle beach.  I knew how I would stand on the seps after breakfast, looking at the day, throwing crumbs to the birds, and later wander out in a shady hat with long scissors in my hand, and cut flowers for the house.


I'm slightly discouraged when I realise that this situation continues when they arrive in Mandeley, Maxim's residence.  Only that I'm no longer in the presence of an inexperienced bride-to-be, but an even more inexperienced lady of the house.  Our protagonist gets acquainted with Mrs. Danvers, the housekeeper, who, having served under the first Mrs. de Winter, makes certain that the second Mrs. de Winter fails - which she does, miserably... She appears in a costume ball wearing the same outfit as the first Mrs. De Winter, to the shock of everyone, including her husband.  She has to disappear from the face of Earth because


This is the first time I start to warm up to her.  I can somehow sense she's going through a transformation, she's finally seeing the people surrounding her for what they are.  When the body of the first Mrs. de Winter is discovered, I finally get to read about a heroine who can handle the world:

I've grown up, Maxim, in twenty-four hours.  I'll never be a child again


If it hadn't been for that last third of the book, I would have been seriously disappointed with the whole story.  But du Maurier has a ace up her sleeve:  dramatic circumstances call for dramatic personalities, and this is what I'm getting.  Our protagonist shines with her readiness to support her husband, to take the reins of the household, and finally disappear from the limelight.  I only find it a pity that she'll have to make do with an unfulfilled life, her only solace being her husband, still the love of her life...

Could she have foreseen any of the tragedies at Mandeley, could she have better prepared for battle?  It seems that yes, she might, had she had an inquiring mind:


I wondered how many people there were in the world who suffered, and continued to suffer, because they could not break out of their shyness


And why would not Maxim have warned her of the dangers?  Well, that was a surprise for me and perhaps a highlight in the book, when he declares that:


A husband is not so very different from a father after all.  There is a certain type of knowledge I prefer you not to have.  It's better kept under lock and key.  So that's that.


I hope he was only trying to protect her from unpleasantries and not really trying to keep her under a leash.  In any case, Maxim is a character I don't quite make out, he's someone I never warm up to, and I'm slightly bothered that he comes out of the whole ordeal just fine...

Rebecca proved to be a great novel to read - the long passages of fascination and wild imagination in the beginning paved the way for the shock of the later part of the novel. The characters were well researched and developped and  delivered a gothic story that will stay in mind...